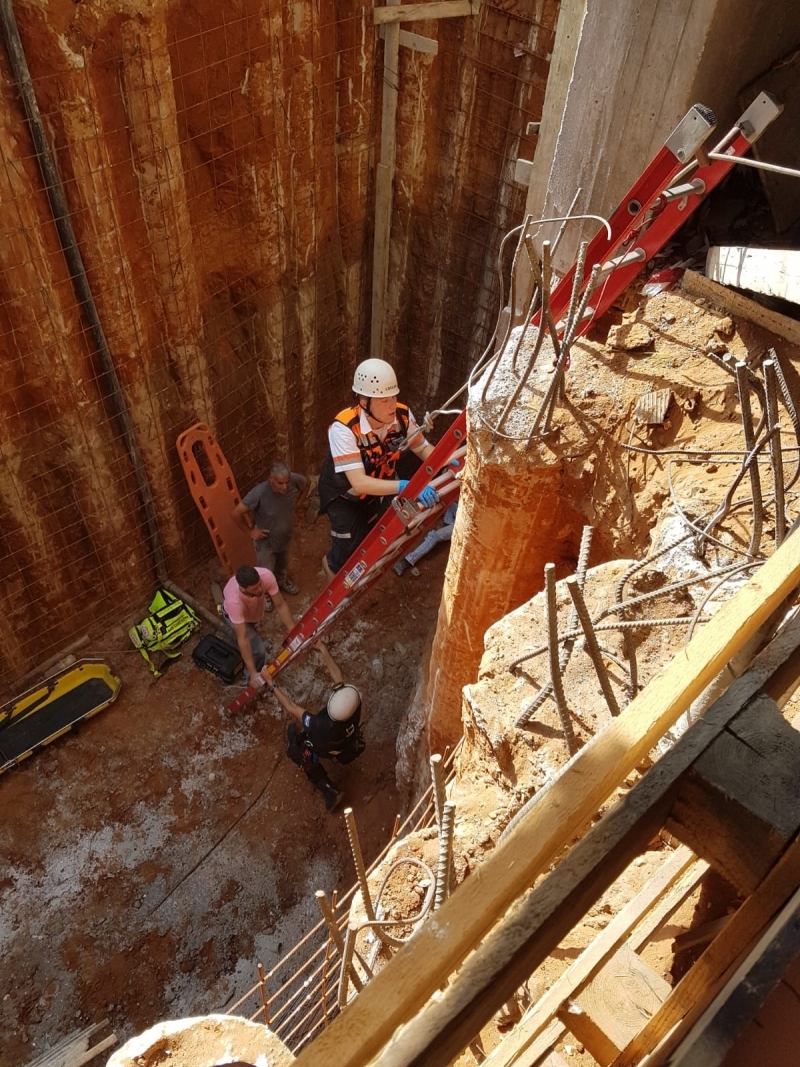 Summary: Week 30 of Work Accidents in the Construction Field for the Year of 2018

The number of workers injured and killed this past week on construction sites is unbearable.
7 severe and deadly accidents occurred between Monday and Friday:

On Monday, July 23, a 35-year-old worker fell from the scaffolding he was on in a construction site on Rabbi Yitzchak Schmidman Street 22 in Bnei Brak. The worker was severely injured and evacuated to Sheba hospital with a head injury.

On Tuesday, the 24th, a 31 year old worker fell from the scaffolding he was on into a six meter deep shaft on a construction site in Rishon LeZion. He was moderately injured and evacuated to Assaf Harofeh hospital with injuries in his limbs and pelvis.

This past Wednesday, July 25, was particularly awful. A 24-year-old worker was injured on a Beit Shemesh construction site on Yonah Ben Amitai Street 26. He was moderately injured after a concrete wall crushed him, and was evacuated to Hadassah Ein Kerem hospital with a head injury. On that same day, 34-year-old Khaled Saleh Abu al-Rub, resident of the village Jalbun near Jenin, was killed. He became trapped as earth was being excavated and was buried alive under the dirt while working on a private, unauthorized dig site in ‘Ara village. The site was shut down for 48 hours and the owner of the property underwent police investigation, but for Khaled it was already too late. At the end of that day, at 10PM, 24 year old Amir Muhammad Zaban, from the town of Qaffin near Tulkarm was killed. Amir fell into an elevator shaft from the seventh story on a Harish construction site. Police statements say that the Amir was an undocumented worker and stayed at the construction site on which he worked. It is unknown whether the site was shut down, as required by law, and which actions were taken by the police in order to investigate the circumstances of this tragedy.

On Thursday, July 26, a 30-year-old migrant worker fell from a height of four stories while performing casting work on a Kiryat Gat construction site on Nofekh street. The worker was severely injured and evacuated to Soroka hospital with a head injury.

The most invisible of all construction workers – Palestinians and migrant workers – continue to stand out among grim statistics: two West Bank Palestinian workers were killed this week, and join another 9 Palestinian construction workers killed since the beginning of the year. Additionally, 8 Palestinian citizens of Israel, 2 migrant workers, 1 non-citizen resident of Israel and 1 Jewish Israeli worker, were killed on construction sites this year. We see a clear connection between these numbers – which show that 95% of all construction workers killed in work accidents are not Jewish Israelis – those that suffer the most tend also be the most marginalized populations and as a result, there is a consistent lack of action to protect workers and take the necessary steps in order to prevent accidents.

Israel needs these workers to build homes, offices and public buildings, but the state forgets to protect them from danger. Without strict regulations, such as the safer European standard scaffolding on every single construction site; without hundreds of inspectors to patrol these sites and impose safety orders immediately; without painstaking fines imposed on these criminals – the blood of construction workers in Israeli will continue to spilled in vain. We call on the Minister of Labor, Haim Katz, to use his authority immediately to bring an end to the plague of preventable construction accidents in Israel.