Over 50 years of occupation have resulted in the Palestinian economy’s dependence on the Israeli economy, which has caused stress and hardship among Palestinian workers and created conditions that foster worker exploitation. Employment in Israel offers workers a higher income than they can attain in the West Bank (2.3 times higher). The need to support their families leads many who are educated to forgo finding work in their profession in the Palestinian Authority and instead look for employment in those sectors open to them in Israel, particularly the construction, agriculture, and industry sectors. In a recent survey we conducted with Palestinian workers in the construction sector, about half of the 256 respondents reported that they pay brokerage fees to obtain work permits. Of these, 81% reported that they pay between 2,000 and 3,000 NIS per month. The unequal power balance between Israel and the West Bank makes it impossible for many workers to consider other, less dangerous, employment options—until they get hurt at work.

As of June 2022, the Israeli permit quota for Palestinian workers stood at 80,000 in the construction sector. Palestinian workers employed in Israel not only support their nuclear family, but often their extended family too. Their income is also key for the overall economic stability of the West Bank as workers with permits bring in about NIS 41 million a day to the West Bank.

Palestinians working in Israel are entitled to compensation for a work injury or illness (whether due to an accident or to an occupational disease). In 2019, out of 115,725 West Bank Palestinians working in Israel (in all sectors), 1.1% (1,249 workers) had received injury compensation, compared to 1.7% of workers residents of Israel. However, the number of Palestinian workers who are injured at work is likely much higher. According to Israel’s National Insurance Institute (Bituach Leumi), accurate figures regarding Palestinian workers are probably lacking due to underreporting. Their assumption is that the level of safety is lower in other sectors and the actual harm to workers is higher.

Findings from KLO surveys, interviews, and the focus group with workers point to a complex picture in which many Palestinian workers are only partially aware of the physical and mental health risk factors they face and are not aware of the possible specific consequences of these risks to their health. 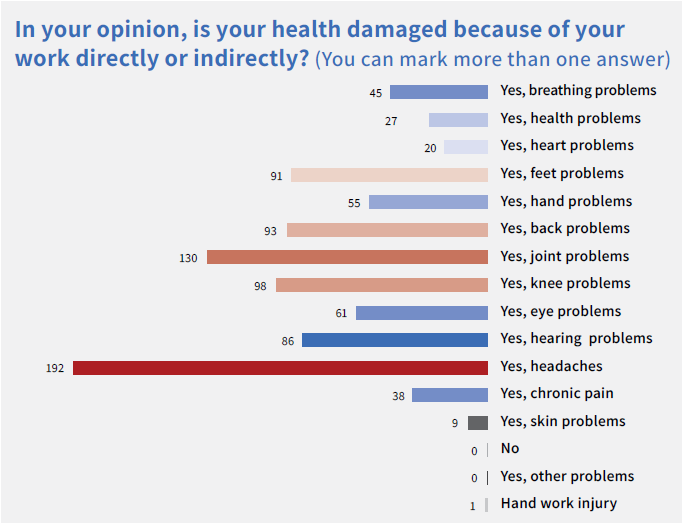 The Israel Institute for Occupational Safety and Hygiene identifies five groups or categories of risk factors, four of which affect the physical health of construction workers, as outlined in the report: 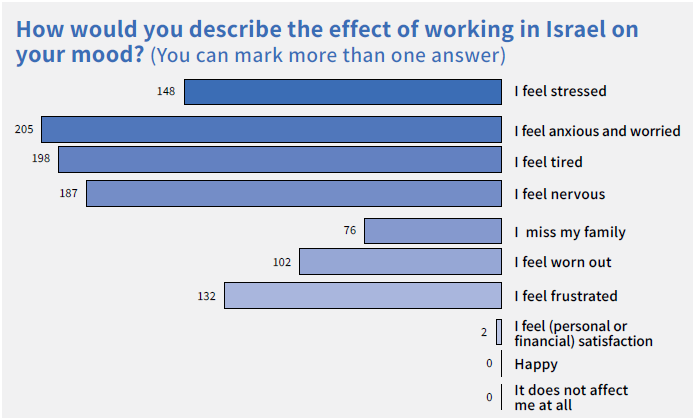