Only the Flowers are Protected

By Noa Shauer, Coordinator for Agricultural Workers and Migrant Housecleaners at Kav LaOved

We arrived at Kfar Vitkin following repeated complaints from workers regarding withholding of payment of their minimum wage salaries and deplorable living quarters. The flower production and export company employs thirty agricultural workers from Thailand and ten students from Uganda. We visited seven workers whose living quarters are among those scattered around the farm. 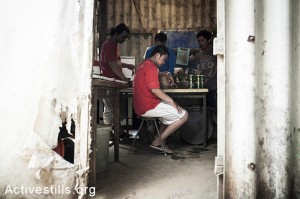 The workers earn about 130 ILS for an eight hours day and 19 ILS for each additional hour. On average they work 300 hours a month. Because most of them came to Israel from Thailand prior to the bilateral agreement, they were required to pay about 350,000 Thai baht, or 37,033.16 ILS to come to work in Israel.

The workers are paid monthly, part in cash and part is sent to the workers’ bank accounts in Thailand. They do not receive any record of the transfer of funds to their account or documentation regarding the amount they have been paid, nor do they receive a pay slip. The workers contact their family in Thailand each month to find out how much was deposited in their account. This is the only means by which they can keep track of their money.

Despite the legal obligation to assist migrant agricultural workers to open bank accounts in Israel, this was never done. We explained to them that they can manage their salaries by themselves and they can set up automatic monthly transfers to their families through the Israel Postal Bank Services. We provided them with pamphlets with information on these options in Israel.

The workers spray pesticides every day for four hours a day. They use a cloth shirt to cover their face in an attempt to protect themselves from the chemicals. They said that on occasion the employer provides the workers with surgical masks made of cloth. When we asked them if they received training in the safe use of the chemicals, they laughed and mimicked the employer’s “yala yala”, (loosly translated as “just get going”) saying that this was all the training that they received.

The workers suffer from headaches, dizziness, and occasional vomiting due to the unsafe use of pesticides. They said that when they told their employers about having serious medical issues, the employer contacted a primary care physician, however, they were unable to communicate with the doctor independently because they do not speak Hebrew making it impossible to get medical care for health issues that do not require emergency treatment. In addition, we asked the workers about the death of Thai workers at Kfar Vitkin. They said that they had heard about a number of instances in which workers died and told us that the employer said in response to the deaths, “If flowers die, it is not okay, but if a Thai worker dies, that’s okay”. 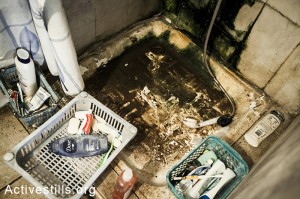 The seven workers we visited live together in a small caravan with beds pushed up next to each other. The space is crowded and claustrophobic. There is only one toilet and one shower for seven workers which are located outside the living quarters. There is plastic sheet and a black net covering the area providing shade. The caravan and the bathroom are attached to the flower hothouse which is hot and humid and can reach 60 degrees centigrade. There is only a net separating the living quarters and the hothouse. A number of the sleeping area windows face the hothouse. The proximity to the hothouse prevents air from coming into the living area and it is clearly very difficult to breath, both in the caravan and outside of it. Some of the workers sleep outside the caravan under the plastic sheet covering due the lack of air and the high temperatures. 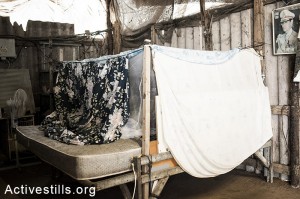 The workers have no real kitchen to speak of so they made an improvised structure from scraps of building materials such as asbestos and plastic creating a covered space in which they have a stove top, an oven, and a sink. There is also a mattress in this area because there is not enough room or air in the sleeping caravan. The workers wash their clothes by hand because they have no washing machine. 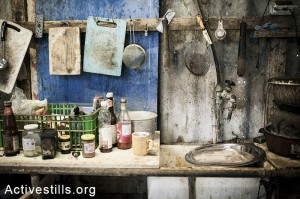 It was very clear that the workers with whom we met are aware that many of their rights are being violated, however they are afraid to complain. The workers emphatically requested that we do not mention their names in our documentation and publications. Their concern stems from an event that took place not long ago, when workers who were employed by another company complained about the working conditions.  In response, the employer dragged them to the car and removed them from the farm. No one knew if they were deported to Thailand or moved to a different employer. Therefore they are not willing to take a chance that they will lose their job before they finish paying back the loans that they took in order to come to Israel to make money.

However, the students now understand that they are in Israel only as laborers. They are not learning flower production techniques and are not involved in the agricultural process, instead they pick flowers. When they landed in Israel they were picked up from the airport and brought directly to a farm where they were forced to begin working on the very same day that they arrived – this despite the fact that that they arrived on student visas and did not consent to work the number of hours that the company is demanding of them.

The students were initially brought to Moshav Batzra where they worked as contractors paid for each crate of oranges that they filled. In order to receive payment they were forced to sign a document that stated that if the farmer does not have the funds to pay the students for the crates they filled, the students must return to Uganda.

Once a week the students attend classes at the Ruppin Academic Center.  They say that there are about 1200 students in the program from Uganda, Malawi, Ruanda, the Philippines, Laos, Zambia, and other countries. Each student pays Agrostudies 1040 ILS a month to participate in the program. Their teachers are hired by the Agrostudies Program (rather than the Ruppin College) and they change frequently. Despite the understanding that they are participating in an agricultural studies program the teachers relate to the students as laborers.

The students described how they are being treated. In one instance, while walking near the living quarters, a student’s leg was run over and crushed. The accident victim was denied medical attention.  He was finally taken to the hospital only after the students threatened to strike. They also related an incident in which three students who complained about working conditions were woken at 5am and taken to the airport without warning, given no time to prepare and deported back to Uganda. 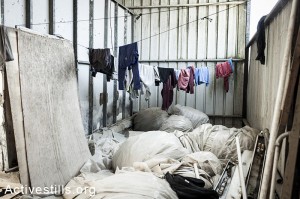 We learned from our visit that both the workers and the students are afraid to complain about the deplorable state of the working and living conditions. We strengthened them with information about the rights that they deserve as workers in Israel. In addition, anonymously but with their permission, we reported what we learned to the Ministry of the Economy and to the Immigration Authority. We also reported our findings to the European Union because the company exports their products to Europe. There is no doubt that even a short visit by the authorities will bring to light the disgraceful and life threatening conditions in which these people live. We would like to see effective enforcement and international concern that would help the workers and the students begin to demand the rights that they deserve.