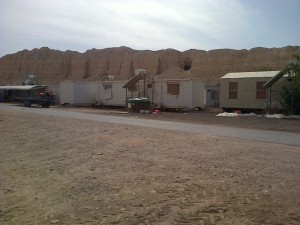 Moshav Ein Tamar is located in the southern part of the Dead Sea. After getting into contact with one worker who complained about not recieving minimum wage and willing to learn more about his rights, we decided to travel to Ein Tamar to visit the workers. We met with them on a Thursday (a day they do not work) at their living quarters only a short distance outside the Moshav. That day the temperature outside was as high as 41 degrees.

250 workers live on the Moshav, however only 150 workers live in the actual living quarters. The quarters consisted of many caravans, some abandoned and some occupied by workers. The abandoned caravans attracted animals and contained air pollution. Some of the caravans have become the main source of pollution in the area. Every populated caravan had an air-conditioner and three to four workers. In some of the caravans there were small kitchens. There were no locks, no lockers, and the workers had no space to store their personal items, clothes, or important documents such as passports. Some of the workers said that the employers were planning on building new living quarters closer to the fields. We did not travel to see the new quarters and cannot contest that are really being built and how they look.

Most of the workers at the site have never seen a salary stub. They recieve an average of 132 shekels for one day’s work and another 17.5 shekels for every additional hour. An average work day consists of 12-14 hours (depending on the day and season). Hours worked on Saturday are counted as additional work hours. The recieve one rest day during the week,except on Saturdays.

The workers reported spraying the fields with chemicals with no eye protection and use only peices of cloth to protect themselves against harmful pesticides. They also admited to not having recieved any instructions regarding work with chemicals. Some of the workers said they experienced various medical impairments, such as burning eyes, nausea, and dizziness. 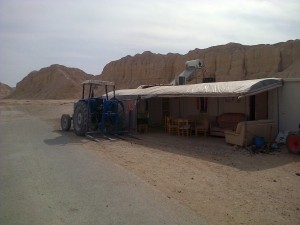 Making Workers Aware of Their Rights

We sat with workers under a tree in the area and spoke with them about their rights during their employment in Israel. The workers were suprised to hear about their rights and most claimed that they had never heard of Kav LaOved and what they were supposed to rightly recieve.

We distributed to them worker’s rights leaflets and had a translator explain each section of the leaflet. After sometime, some of the workers told us that they were on the verge of finishing their employment period in Israel and asked to know what damages they could recieve. We wrote the workers personal letters to their employers demanding the rights they should recieve after their employment. In additon, we explained to the workers that despite the distance, we could help them in many additional ways. We recommended them to send us statistics via facebook (in a private message) regarding their conditions of employment, and anything necessary for calculating what they deserve. This would provide us the information to write letters and send them to the Moshav. One worker claimed that he had an email account and could help provide us with the information to send out the letters for the other workers. We also told them that they can contact us via the Migrants Hotline.

Demanding the Right for Health

The workers explained to us that they were unaware that they were going to work in the area of the Dead Sea when they agreed to come to Israel from Thailand. Some of the living quarters were located in dangerous areas. Sum, 37 years old, told us that he experiences difficulty breathing from the intense heat and dust in the air. Sum requested from the private bureau he works for to allow him to switch employers, however the bureau refused to do so. Rath, 35, lives and works in a place with her spouse. They were married in Thailand, had three children the ages of 13,8, and 3, but divorced in order to come and work in Israel together. Now, her husband is sick and work is getting harder for him. The husband was in bed when we arrived but didn’t speak. His wife said that they were afraid that if they would tell the employer, he would fire her husband and force them to leave Israel.

We explained to her that they would not have to leave Israel and that they should really seek medical attention, which could provide them the medical documents needed to protect their rights. During our time with the workers, an additional worker claimed that she was having tooth pain, and that her employer took her to a dentist after paying 1500 shekels. Due to the high expenses, workers don’t want to go to the doctor. We spoke to them about health insurance, and they asked about getting an insurance card. The workers discussed the difficulty of the language barrier- how will they go to the doctor and explain their pain if the doctor cannot understand them? We tried to give them other options: to go with someone they may know who speaks/understands basic Hebrew, or English; to try to explain themselves with movements; to insist; to call the manpower company and demand to speak with a translator- the concrete solution was not in our hands, but in theirs.

Another worker was not even registered by the employer as working in the north at Moshav Azriel. The worker alternated between Ein Tamar and Moshav Azriel. He said that his passport was taken by his employer in the north permanatly. Other workers reported that their employers had taken their passports. Some of them choose not to complain under the claim that their employers took their passport for only one month to settle visa issues (this is illegal) and that ususally the passport was with them. There were some whos passports were with their employer from the day they arrived in Israel. Most of them were uninclined to complain about their employers out of mere isolation and dependency on their employer, and of course, out of fear.

Kav LaOved sent the claims of the workers from Moshav Ein Tamar to the Ministry of Economy and to the Immigration Authority.The disturbances described in this piece are all against labor laws in Israel and against the visa conditions set by the State.