During July 2011 workers in agriculture from Moshav Achitov put on a general strike demanding decent living conditions and minimum wage. Representatives of the Ministry of Economy and Immigration Authority arrived at the workers’ protest to mediate between employers and workers. As a result of the protest, four workers were fired and sued their employers.

We decided to travel to Moshav Achitov – one of the largest producers of cucumbers in Israel – and to see for ourselves whether the living and working conditions of the workers have changed. Fearful of their employers, the workers requested that we meet them outside the Moshav. Even though we arrived on a Saturday, the workers had worked that day until 13:00 and only after came to meet us at the grove next to the Moshav. Kessie Gonen, the Co-coordinator for Thai workers at Kav LaOved, taught them about their rights, distributed workers’ rights leaflets and answered many questions. 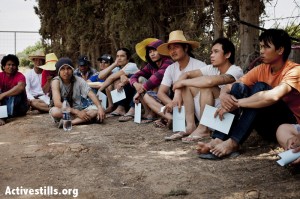 The workers admitted to earning 120 shekels for one day of work and 20 shekels for every additional hour. They work between 10 to 14 hours a day. They do not recieve salary stabs and have never been told to open an Israeli bank account, a condition set by the Immigration Authority. The workers recieve their salary in cash and have no way of knowing whether the amount they recieved is the amount earned. The workers recieve four vacation days on Thai holidays and no additional vacation. They alternate working weekends and recieve no salary when working on Saturday. 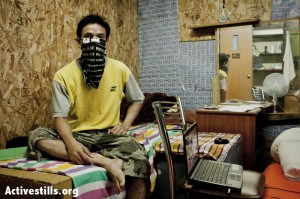 The workers use strong and dangerous chemicals around 4 times a month, and according to the demand of the employer. They have never recieved any education or instructions on using pesticides and do not recieve any eye or face protection. 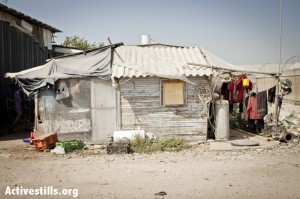 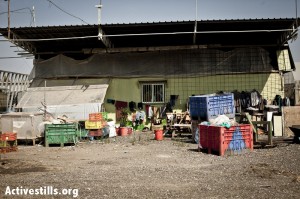 After finishing our conversation with the workers, two of them agreed to take us to their living quarters. The first place we arrived to was a backyard of a villa on the Moshav. The quarters included some old caravans connected by a large storage unit (for workers to sit in to escape the horrendous heat) alonside a line of shacks. The shacks were divided into smaller rooms the length of about 10 meters, without windows and air sockets except for the small door. The shacks were connected to one another, covered only by plastic. The shacks were extremely hot and stuffy and inside the rooms it was difficult to breathe. We walked outside the living quarters, in awe of the shocking difference between the villa of the employer in the frontyard and the meager quarters of the workers in the back. The kitchen was shared by all the workers, with one cutting board attached at the end of the caravans used for cooking and dishwashing. It is important to note, the space was so hot and insulated that it seemed that it could easily catch on fire. 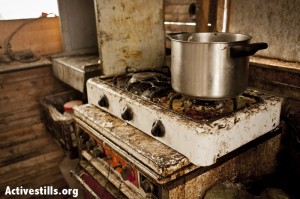 The caravans were set up in such a way that forbid any privacy for the workers. At the additional living quarters we visited, we saw a huge storage space, divided into rooms. In one room, the largest of them all, lived five workers. In the two other, smaller rooms lived two workers in each room. The workers had no dressers, personal lockers, or place to store their things. Their clothing was dispersed inside and outside of the space. The storage space, which seemed to have been used for different purposes in the industry, did not close and walls could not reach the roof. In the winter the workers admitted that water seeps through the holes in the walls, and in the summer they can hardly breathe. Close by, there were another set of quarters. The quarter was an old truck parked under a few trees, next to a working packing house. Behind the truck was a container where two more workers lived. They all have one fan to share in the summertime, two mattresses and folded clothing in the corners. Like every truck, there are no windows in the back and no air sockets. In the winter the door remains closed, closing out any fresh air. 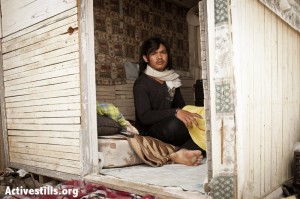 The workers we visited remember the protest two years ago- some even participated in it. In their opinion, nothing has changed and there is little improvement. They are still earning less than minimum wage, still living in humiliating livilng conditions and still very afraid of their employers. When the Ministry of Economy and the Immigration Authority arrived during the protest they knew the living conditions and the salaries- in spite of this knowledge, they allow employers from Moshav Achitov to continue to employ workers who do not recieve minimum wage and decent living conditions. We are working to collect more information and facts pointing to different instances of rights disturbances at Moshav Achitov to force authorities to take action.