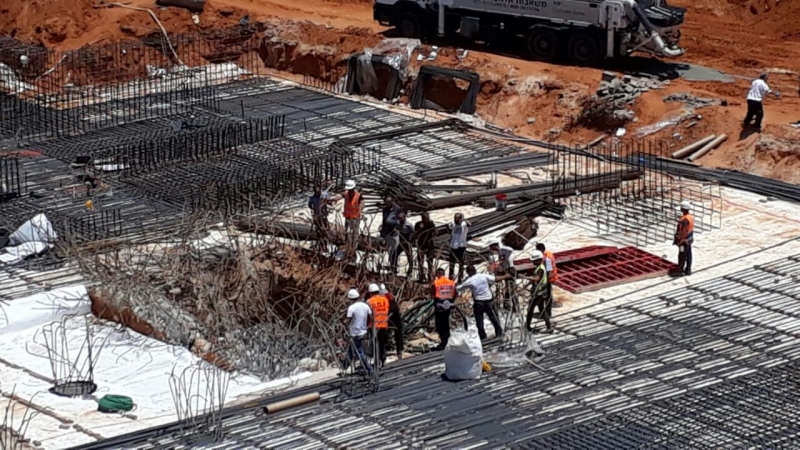 The state of Israel has shown continuous incompetence in dealing with work accidents in the construction sector. Each year, dozens of workers are killed due to unsafe working conditions, and no one is held responsible. The number of workers killed in Israeli construction sites is 2.5 times larger than that of the European Union (per 100,000 workers). Government supervision is lacking – an average construction site is visited by an inspector only once every 3 years! Many of the safety standards in this sector are outdated, and new ones are hardly ever put into effect. At the end of the day, those who build our homes, through strenuous physical work, are those who end up paying the price for the state’s negligence with their lives and wellbeing.

The state of Israel has demonstrated continuous incompetence in dealing with the phenomena of work accidents in the construction sector. Each year, dozens of workers are killed due to unsafe working conditions, and no one is held responsible.

The number of workers killed in Israeli construction sites is 2.5 times larger than that of the European Union (per 100,000 workers). Government supervision is lacking – an average construction site is visited by an inspector only once every 3 years! Many of the safety standards in this sector are extremely outdated, and new ones are hardly ever put into effect. At the end of the day, those who build our homes, offices, public spaces, and much more, through strenuous physical work, are those who end up paying the price for the state’s negligence with their lives and wellbeing.

The construction sector in Israel remains the most dangerous for workers, with mortality rates more than double those of the OECD average and growing each year. Migrant workers, Palestinian citizens of Israel, and Palestinians from the OPT are disproportionately represented in construction sector injuries and fatalities: 80% of those killed in accidents are non-Jews, while they represent only 65% of the workforce. Despite their higher mortality rates, Palestinians and migrant workers are among the least protected in the event of work injury and face significant hurdles obtaining worker’s compensation among a host of other labor rights violations, including labor trafficking. Click here for information on KLO’s anti-trafficking work.

Factors such as poor transparency on the part of governmental agencies, an endemic disregard for the welfare of workers, and lack of investment in safety on the part of construction companies all contribute to trends of increasing mortality rates. Racism and discrimination also play a role as the majority of those killed are non-Jews. Thanks to public pressure galvanized by the advocacy efforts of KLO and other organizations working on this issue, a series of agreements were made between the Histadrut and governmental agencies in the fall of 2018. These agreements promised a sea of change in construction safety. Despite these landmark agreements, many of the proposed changes remain in their infancy and are inadequate, while many other potential changes have not been initiated.

KLO plays a leading role in advocating for improved safety for construction workers. We monitor and track workplace accidents, government agency investigations, and enforcement efforts in order to identify trends in safety violations as well as gaps in the state’s actions. Analysis of our monitoring efforts, in turn, guides our efforts to advocate for needed legal, policy, and regulatory reforms.

Informing Workers About their Rights

KLO provides online labor rights information relevant for construction workers in Arabic, English, Hebrew, and Chinese on our website and provides posts regarding government policies on our Facebook pages in Hebrew and Arabic. Additionally, we keep the public updated on issues related to construction sector safety through our media outreach.

KLO is one of the main sources of information on issues related to safety in the construction sector. Our extensive monitoring work highlights the root causes of accidents, names companies with the worst safety records, and evaluates the effectiveness of government efforts to improve safety. These monitoring efforts provide critical transparency regarding construction sector safety for civil society actors, the media, and the public.

We maintain an online database covering each work accident in the construction sector, which provides critical information, including the level of injury, accident site, accident cause, and construction company managing the site, among other categories. We publish the name and picture of each worker killed to share the human impact of construction sector negligence.

KLO also investigates and exposes the root causes of safety infractions caused, in part, by government bureaucracy that continue to serve as roadblocks to reform. Analyzing data gained through Freedom of Information (FOI) requests has revealed that construction accident cases are not investigated and prosecuted at anywhere near the appropriate level by the Office of the Attorney General, the police, the Ministry of Labor, or the police’s national investigative unit, Peles.

KLO issues a yearly report covering all work accidents in the Israeli labor market, an important source for reviewing trends in workplace safety. Analysis of work safety in 2020 sadly revealed a 20% increase in workplace injuries compared to 2019. However, 24% fewer workers were killed in 2020 compared to 2019.

KLO conducts broad-based efforts to improve safety in the construction sector through engaging the media as well as conducting legal and policy advocacy. In addition to improving the legal policy and legislative framework for safety standards in the construction sector, KLO’s work helps to promote social change in Israel as well. KLO assists in shifting the norms around safety and regard for the lives of workers, particularly Palestinian citizens of Israel, Palestinians from the OPT, and migrant workers who are disproportionately affected. KLO is working on a number of key policy issues as described below.

Poor safety oversight in the construction sector. As a result of the Histadrut agreement, there are now 80 safety inspectors for construction sites. Despite this increase, this number is still very far from the OECD minimum standard of 180 inspectors.

Increasing the number of investigations initiated by the Peles unit. The Peles Unit is composed of representatives of the police as well as the Ministry of Labor Safety Administration. While, in principle, the launch of the joint investigative Peles Unit was a positive step toward increasing the number and quality of investigations, the unit continues to fall short of its intended goals. Many cases have been left untouched, including cases involving worker fatalities, license forgery, and instances of human resource departments not operating per regulations.

Maintaining transparency regarding hearings and penalties issued to contractors committing safety violations by the Contractor’s Registrar. There have been setbacks in ensuring that problematic contractors are banned from the list of bidders on government contracts as promised in new regulations under the Histadrut agreements. This has meant there are few deterrents to poor safety practices on work sites. In July of 2020, new regulations were put into place setting the bar for revocation of a license at 10 safety orders instead of two as had been established previously. At the same time, the Contractor’s Registrar is holding few hearings for those contractors identified as having more than 10 safety violations and has no clear criteria for assessing safety records and rescinding or reinstating licenses, contrary to prior statements that there was a policy in place for this. The criteria for revoking licenses temporarily and permanently is also not coherent.

Increasing the number of fines issued and collected by the Safety Administration for contractors committing safety violations. At the beginning of 2018, fines were introduced as an important enforcement and deterrence tool against safety offenders. The law authorized labor inspectors to impose fines of between 20,000-35,000 ILS. However, KLO analysis of fines issued as of mid-2020 shows that since 2018 only 1,500,000 ILS were actually collected from offenders. This means that only about 50 contractors paid a fine. According to the authorities, this law was not really enforced in 2019 and they cited a cumbersome appeal mechanism that leads to delays in adjudicating fines. The appeal process excuse does not offer a sufficient explanation for the lack of fines issued.

Media Advocacy. KLO’s monitoring efforts, investigative work, and overall policy analysis serve an important role in keeping the public and civil society actors informed on the status of construction sector safety—both in progress made and key issues that still need to be addressed. We work closely with the media to disseminate this information, providing transparency on the overall reform process and fostering momentum for the implementation of further reforms.