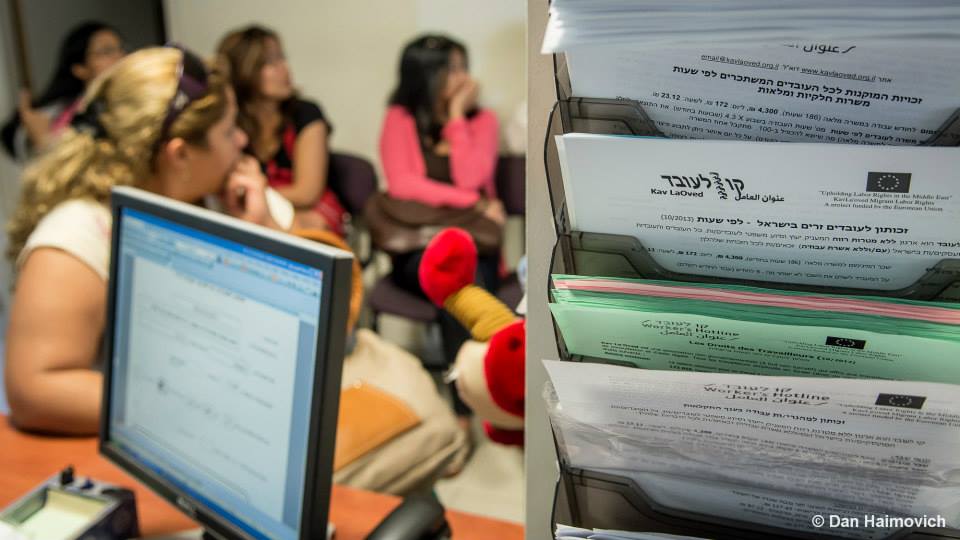 Economic disparity continues to widen in Israel as new exploitative employment models develop. Approximately a third of Israeli workers are today employed in hourly jobs or through third parties, which are less regulated and protected by Israel’s legislation. As a result, they are particularly vulnerable to unstable schedules, seasonal terminations as well as regular violations of social rights and other labor rights abuses. KLO assists Israeli citizens earning less than 6,500 ILS per month (circa $2,000) many of whom are recent immigrant from Ethiopia and the former USSR as well as Palestinian citizens and religious orthodox Jews.

Israelis earning less than 6,500 ILS per month, many of whom come from minority communities such as new immigrants from Eastern Europe, Russia and Ethiopia, as well as Palestinian citizens.

Economic disparity continues to widen in Israel, leaving large gaps of income inequality and the risk that vulnerable communities will be left behind. KLO’s work targets marginalized workers who face barriers to full participation in the labor market based on language, gender, religion, race, and ethnicity. While programs to integrate Palestinian citizens, Ethiopian Jews and other vulnerable workers into the workforce are emerging to the fore, much less has been done to protect and enforce their labor rights as they enter the labor market. Without such efforts, these workers, and particularly the most marginalized among them such as women, face slim odds for significant improvement of their economic standing.

Central to addressing the lack of equal access to opportunity is improving legislation to deal with exploitative employment models emerging in Israel. Israeli labor law was written to protect the rights of workers in a traditional employment model, in which the employee was directly hired by the employer and usually remained at the same firm, often full-time, for much of their career. Increasingly, this model has been replaced with indirect, third-party contractual labor and part-time or irregular employment—approximately a third of Israeli workers are employed as hourly workers.

Israeli labor code has not kept up with the increasing rate of change, leaving many workers vulnerable to unstable schedules, seasonal termination as well as regular violations of social rights and other labor rights abuses. Vulnerable populations, such as new immigrants and Palestinian citizens, may find themselves particularly vulnerable due to factors such as discrimination, limited fluency in Hebrew and lack of job opportunities. Many are forced to work in the informal sector as a result. In addition, the pension system presents consistent problems and elderly workers on the verge of retirement may have difficulty understanding pension rights.

KLO supports Israeli workers in understanding their labor rights through a variety of means. We publish “Know Your Rights” brochures in Hebrew, Arabic and English to educate workers on Israeli labor law. In addition, we host a Hebrew language Facebook page, which offers updates on regulations and policies and provides workers with a forum to ask questions and share experiences.

Labor Rights Violations of Subcontract Employment. Through position papers and legal advocacy, KLO’s work highlights ways this employment chain is affecting not only Israeli citizens, but also asylum seekers for whom this kind of employment is also very common. The terms of subcontract employment are usually worse than those found in direct employment. This model of employment often offer wages less than those standard in the sector of work through direct employment and subcontract labor terms also frequently place barriers to obtaining labor rights as workers are unable to address the employer directly. Kav LaOved’s experience with workers employed via subcontractors shows that they often receive payment which does not reflect the contractual agreement, but that pursuing legal action in these cases is often tedious as the parent companies usually deny responsibility

Fighting Discrimination. KLO works to address discrimination in the workplace and won an important lawsuit in the fall of 2019 on this issue. We represented a female Palestinian citizen Israel who brought a case against a dental clinic, which had refused to hire her as a doctor since she wears a hijab. The court ruled that such practices are discriminatory and ordered the clinic to pay her 40,000 ILS plus 10,000 ILS in legal expenses. This is the first time an Israeli labor court has awarded compensation to a woman who was not hired due to wearing a hijab. The case also sets an important precedent for other such cases which may emerge.

Addressing Trends in Lower Wages and Income Equality. KLO is working to address trends in greater income inequality and lack of enforcement of worker’s rights through greater awareness raising efforts and advocacy efforts. A policy paper (in Hebrew) published by KLO in 2020 on this issue revealed that that 11% of the workforce did not receive the minimum wage between 2016 and 2019. Those most affected by violations of the minimum wage law were the very old and the very young, women, those with lower education levels and members of minority communities (Palestinian citizens and Haredim), and unskilled workers. Despite widespread employer violations regarding the right to a minimum wage, the state has not fulfilled its obligation to uphold the minimum wage law. The Regulation and Enforcement Administration, responsible for enforcing labor laws, has actually seen its budget reduced by 37% in 2019 compared to 2016. And KLO’s analysis of government data showed that warnings and sanctions for breaking the minimum wage law were issued to only 0.09% of employers in 2018 and 0.05% in 2019.

Media Advocacy. KLO contributes to articles in the press regarding challenges Israelis, particularly Palestinian citizens of Israel, face in the labor market. Media outreach is critical to KLO’s legal work to support social change for Palestinian citizens, women and other minorities in Israel by informing the public of new legal precedents that set the tone for more inclusive and fair labor market conditions.