Violation of the Right to Medical Care of Palestinian Workers

The Finance Ministry’s Exploitation of a Weakened and Voiceless Sector of Workers: 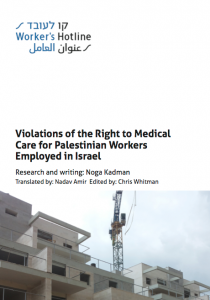 Kav LaOved–Worker’s Hotline published today an updated report which portrays a disturbing reality with regards to the basic right of health care for Palestinian workers employed in Israel. In the report, we detail the manner of money collection intended for health and welfare services, and expose data collected through the Freedom of Information Act on the tens of millions of shekels the finance ministry keeps to itself, at the expense of the health and welfare of Palestinian workers employed in Israel.
Nearly 100,000 Palestinians currently work in Israel with permits from the Israeli government. From their salaries, high sums are collected and deducted which are intended to be used for health and social services. More than 100 million NIS were collected in 2014 alone for this purpose. However, most of this amount is transferred to the Ministry of Finance, and Palestinian workers have no access to it or the ability to enjoy it.
Despite the high fees, most Palestinian workers are not being paid for sick leave. Those who are injured while working are required to pay for most medical treatments they require, in Israel or in the Occupied Territories. In addition, millions of shekels are transferred to health clinics which are designated for occupational health services, but are not being used for this purpose.
Additionally, the State Comptroller’s reports, which expose and criticize the improper conduct of the state, did not stop the ongoing transfer of funds to the Ministry of Finance, rather than to social services for which they were deducted from the workers’ wages in the first place.
For reading and downloading the full report press here
Short Background:
Palestinian workers employed in Israel are entitled to wages and conditions identical to those of Israeli workers. The employers are required to pay the workers a net salary, report the salary to the Payment Section at the Ministry of Interior (akaMatash) and transfer to the latter employer payments and deductions from the workers’ wages, including:
–          Funds for insurance and health pay – which Matash must transfer to the National Insurance Institute of Israel, to the Kupot Holim (Israel’s health maintenance organizations – HMO) and to The Ministry of Finance (and from there to the Palestinian Authority).
–          Equalization Surcharge – the difference between the full insurance pay and the partial insurance covering Palestinian workers. The sum is transferred to the Ministry of Finance and is supposed to be transferred to the Palestinian authority and to the Kupot Holim
–          Sick pay and vacation pay – which should be paid by Matash to the workers during their work.
–          Severance pay and pension – starting at four months from the end of their work, the workers are entitled to receive the funds accumulated during their years of work.
In 2011 and 2012, employer payments to Matash for the wages of Palestinian workers amounted to 868 million NIS and 1.138 billion NIS respectively. Between January-august 2013 they amounted to around 1 billion NIS. The total sums transferred by Matash to the Ministry of Finance amounted to 2.524 billion NIS at the end of 2013 (see State Comptroller’s report 2014).
However, much of these funds does not reach the Palestinian workers at all and is not being used to implement their social rights. One reason for this is that Israel does not transfer to the Palestinian authority funds which are supposed to be paid to the latter. Another reason is the conduct of Matash, which as noted by the state Comptroller in 2014, “has failed to fulfill its duty to protect the rights of Palestinian workers”, by failing to equate the wage conditions and employment rights of Palestinian workers to those of Israelis, as required by law. The Comptroller wrote that he “regards the conduct of Matash as gravely wrong”, and that “the Government should review the duties of [Matash] and the continuation of its operation in the future with respect to this issue”.
Kav LaOved-Worker’s Hotline calls upon the state of Israel: To start providing health insurance to Palestinian workers employed in Israel who are in need of medical care while staying in Israel for work purposes / To ensure that sums collected from employers of Palestinian workers for sick leave funds, work accident insurance and Equalization Surcharge will be used in an efficient manner for the purposes for which they were collected / To reinstating disability insurance as part of the workers’ comprehensive pension fund.