Urgent matters that need to be promoted in the 25th Knesset

A new Knesset is about to be formed and we urge its members to consider these 8 issues concerning the rights of workers and their well-being that urgently need to be addressed. 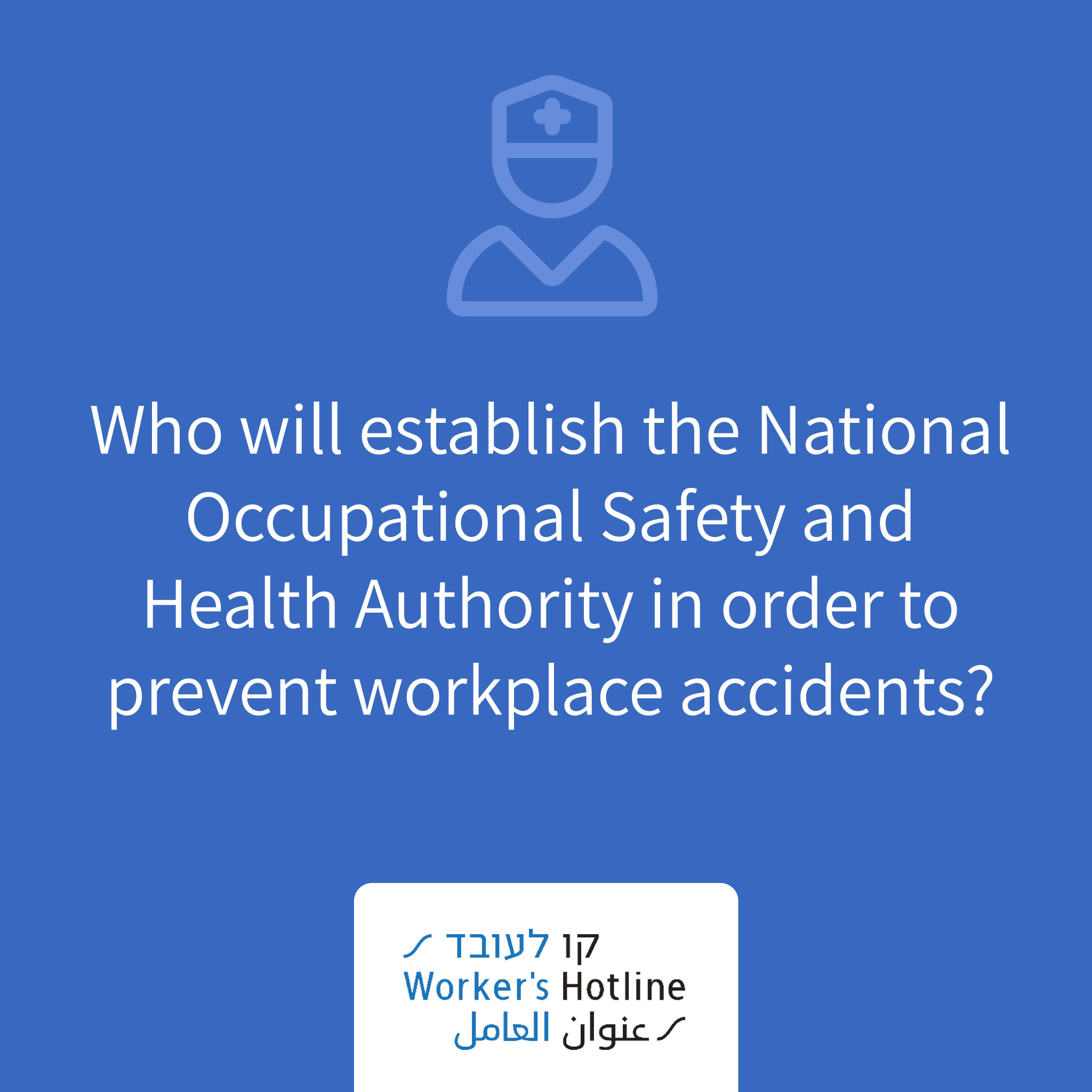 More than a decade ago, the “Adam Committee” determined that a “directing hand” was needed to formulate policy in the field of occupational safety and health, to unite the interests of the various authorities in the field and to integrate resources in a way that would foster effective preventative efforts. The future government must allocate a budget for the establishment of a dedicated National Authority for Safety and Occupational Health and eliminate the division between regulation and enforcement functions held by the Occupational Safety and Health Administration and the research, prevention and training functions that exist within The Israel Institute for Occupational Safety and Hygiene.

We also wrote all current MPs and asked them to clarify their position on the establishment of a national authority in the upcoming budget law, with the establishment of the government, and we inquired what they intend to do in the next Knesset to promote the safety and health of workers in Israel. The new government will need (and can) act to change the face of the current reality. 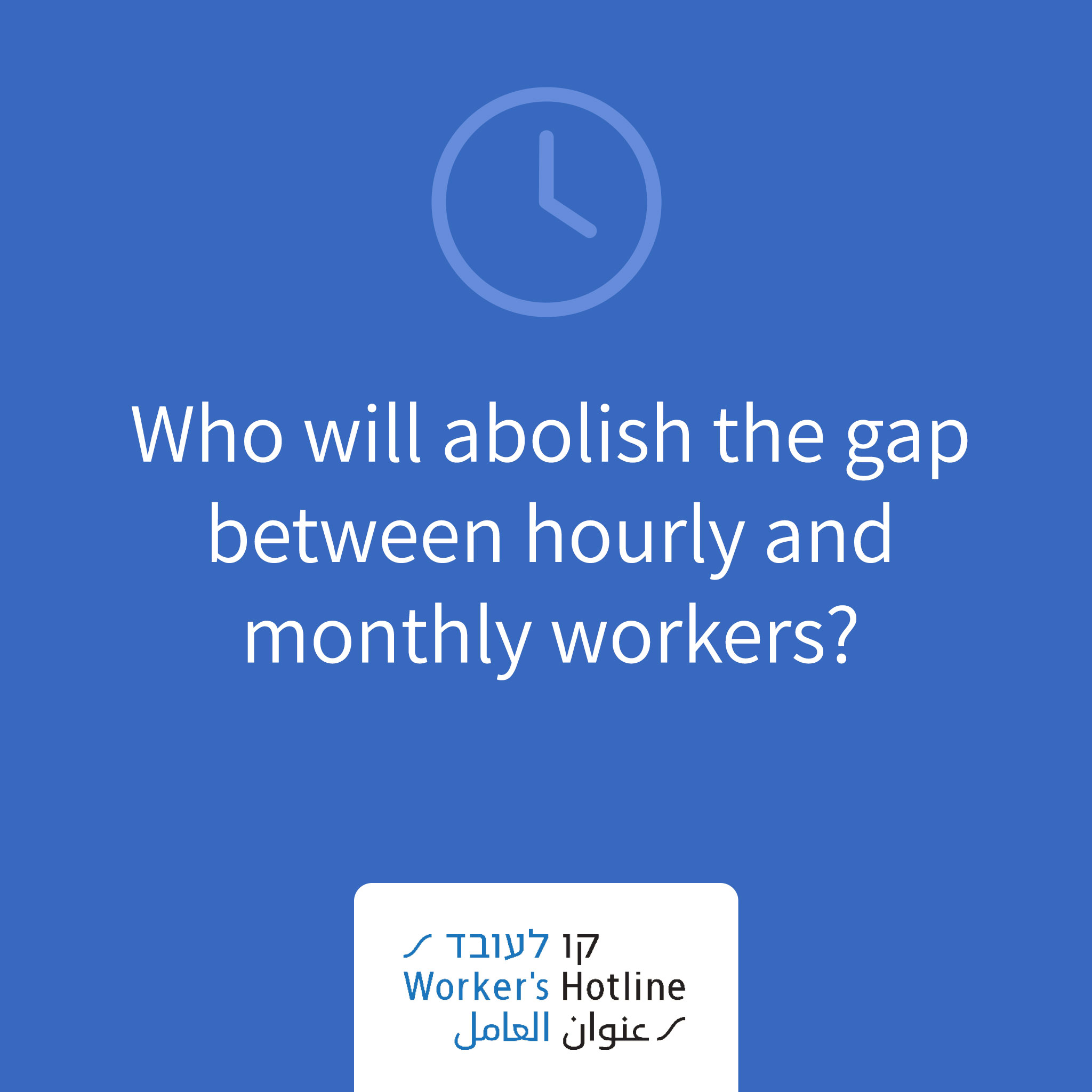 Legislation that exists today allows for the employment of workers on an hourly basis and causes unjustified gaps between them and those employed with a fixed monthly salary. A legislative amendment is needed to address the hourly employment of workers, in order to prevent and mitigate the harm caused to the most vulnerable workers. An amendment to existing labor laws is required to eliminate unjust policies for hourly workers in relation to issues such as holiday pay, advance notice and severance pay. The Ministry of Economy and Industry is responsible for promoting the issue. 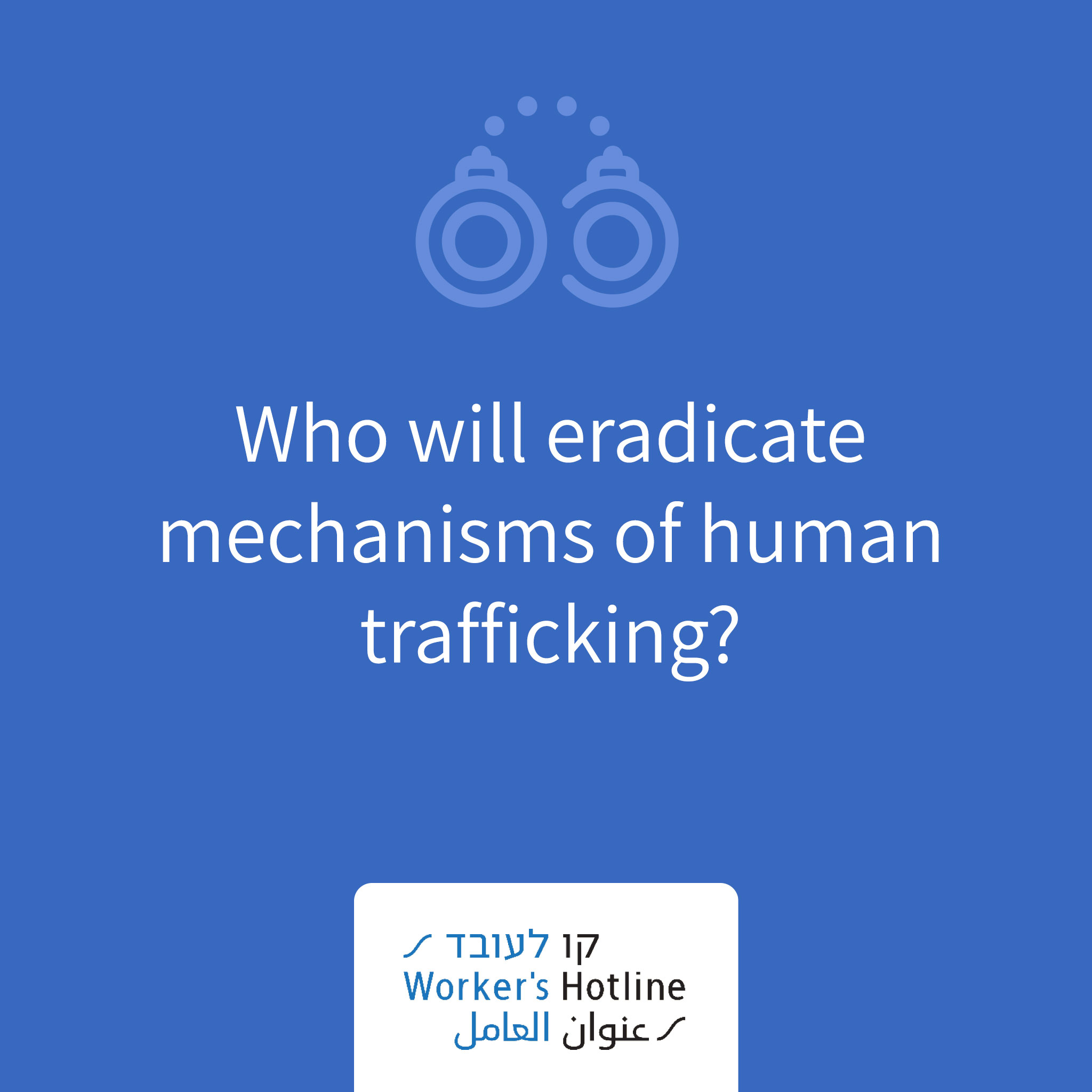 The root cause of binding workers to their employers is, not infrequently, brokerage fees charged non-Israeli workers for the “right” to work. A worker who pays brokerage fees starts their employment with a huge debt, loses their bargaining power and is often forced to work under any and all conditions until their debt is repaid. The State of Israel chooses to rely on migrant workers in industries in which it faces a shortage of labor, and it is necessary to eradicate phenomena such as the payment of illegal brokerage fees and the binding of workers to their employers that infringe upon the basic rights of these workers—and, in extreme cases, even lead to human trafficking and modern-day slavery.

In order to eradicate these rights violations, the following is needed: government decisions requiring bilateral agreements to recruit migrant workers for sectors such as caregiving and agriculture must be followed, including the signing of bilateral agreements with countries from which Israel already brings workers; policies that cause workers to be bound to private Employment Offices in caregiving must be cancelled; employment pathways that bypass bilateral agreements must be closed; and enforcement of labor law among employers of foreign workers must be increased. The Ministry of Interior, the Population and Immigration Authority and the Regulation and Enforcement Administration must be on board to promote these issues. 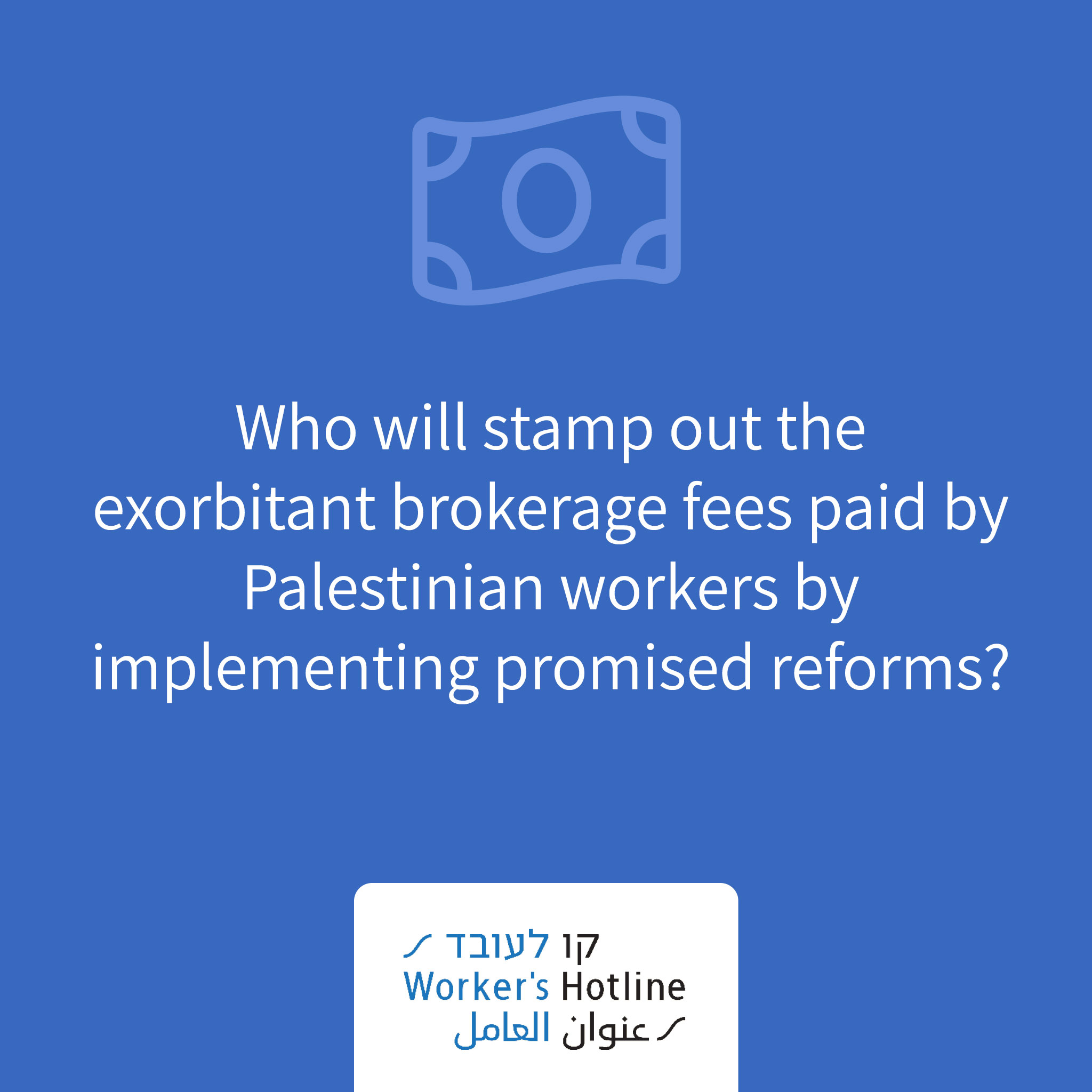 In December 2020, the government began implementing a reform in the employment of Palestinian workers in the construction sector, which was also designed to eradicate the trade in work permits. However, according to a survey conducted by KLO in the spring of 2022, about 50% of Palestinian workers in the construction sector still pay brokerage fees, and 80% of those workers reported paying between 2,000-3,000 NIS per month to a broker. Implementing the reform requires making information about potential Israeli employers accessible to Palestinian workers (for example, by improving the Al-Monask application, which was designed for this very purpose), and holding job fairs to connect Israeli employers and Palestinian workers directly so that workers are not forced to pay excessive fees to intermediaries to find employment. A reform that is not implemented or enforced abandons the workers to exploitation and perpetuates the despicable brokerage fee phenomenon. The Population and Immigration Authority and the Civil Administration need to be on board to promote this issue. 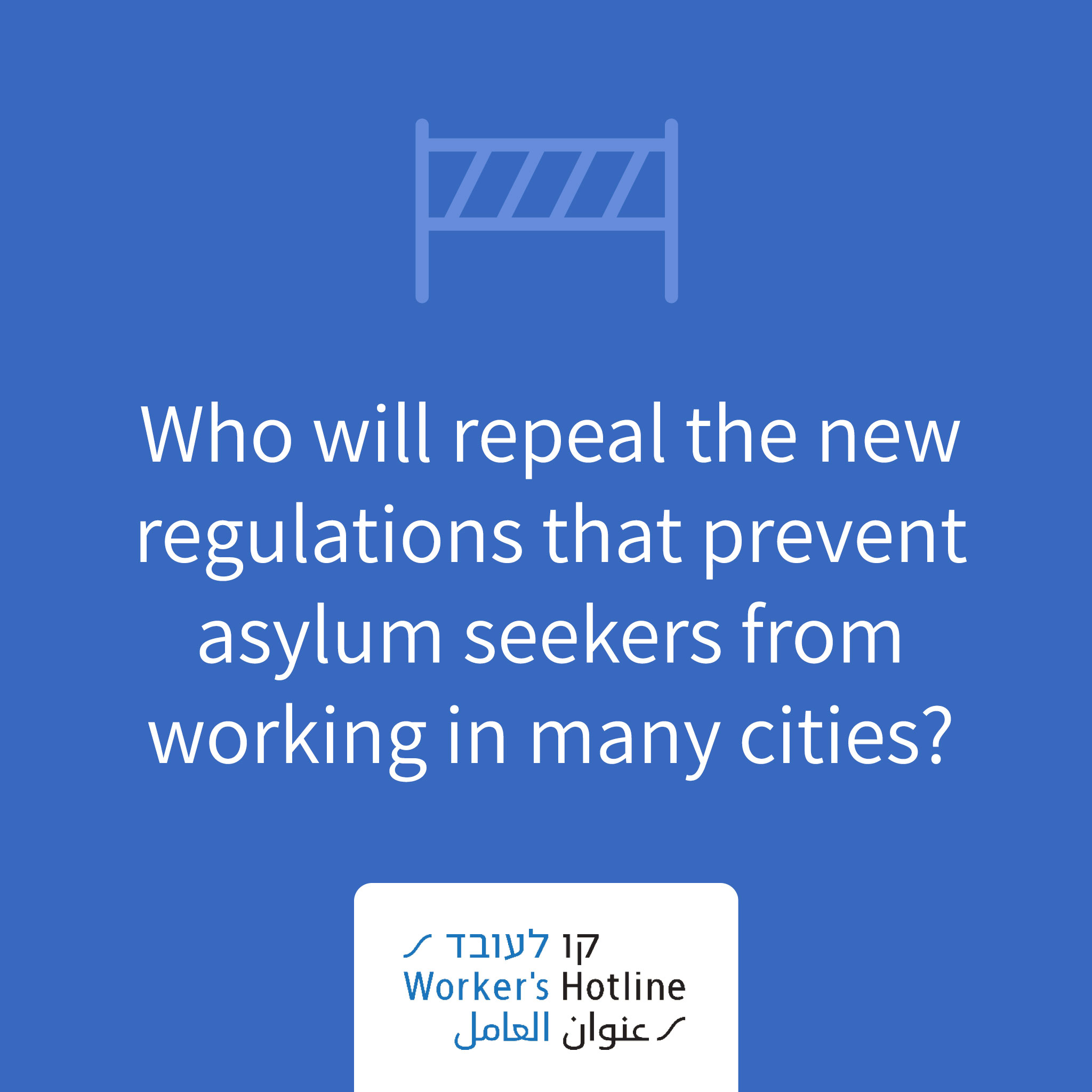 New regulations of the Ministry of Interior seek to reduce employment options for asylum seekers and refugees, thus pushing them out of 17 cities in Israel (unless they work in agriculture, hotels, institutional care homes or construction). Parents of children in the education system and those at or above the age of 60 are exempt. Since the regulations are expected to harm an already disadvantaged population – who have legally lived in Israel for over a decade – as well as their co-workers and employers, we petitioned the court and demanded that it be canceled immediately. We will continue working with policymakers to protect asylum seekers and refugees in light of the repeated attempts to harm them by denying them their livelihood. The Ministry of the Interior can cancel the procedure. 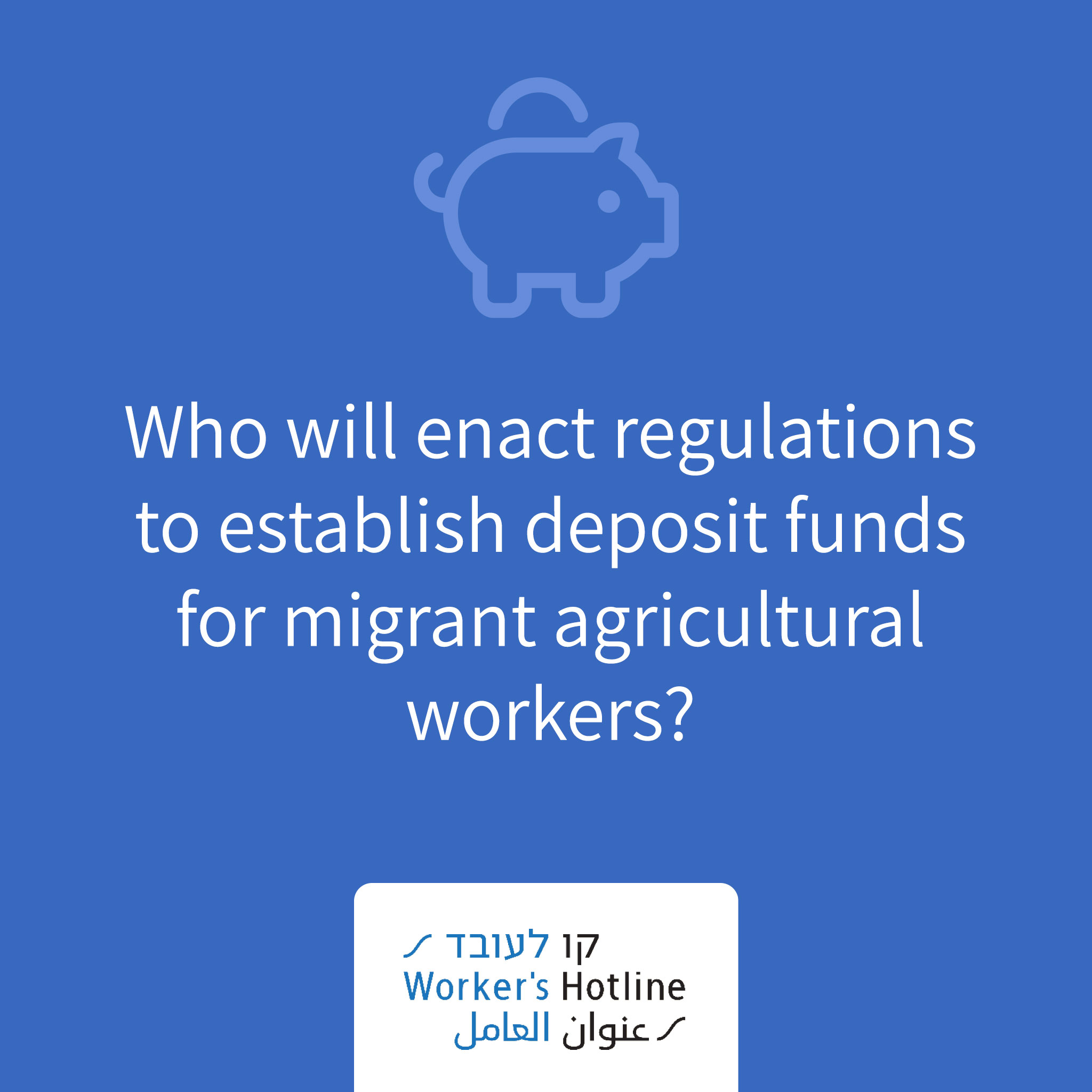 Decision number 213 of the government stated that a deposit fund for migrant workers in the agricultural sector must be established, but recently it was announced that farmers demand that formation of deposit accounts be tied to an increase in allowed deductions from the wages of migrant agricultural workers for housing expenses.

Our demand: regulations must be in place requiring the payment in deposit accounts of social rights for which migrant workers in the agricultural sector are eligible, in accordance with the stated decision of the government, without tying it to the deductions allowed from the workers’ wages. The Ministry of Economy and Industry can promote the issue. 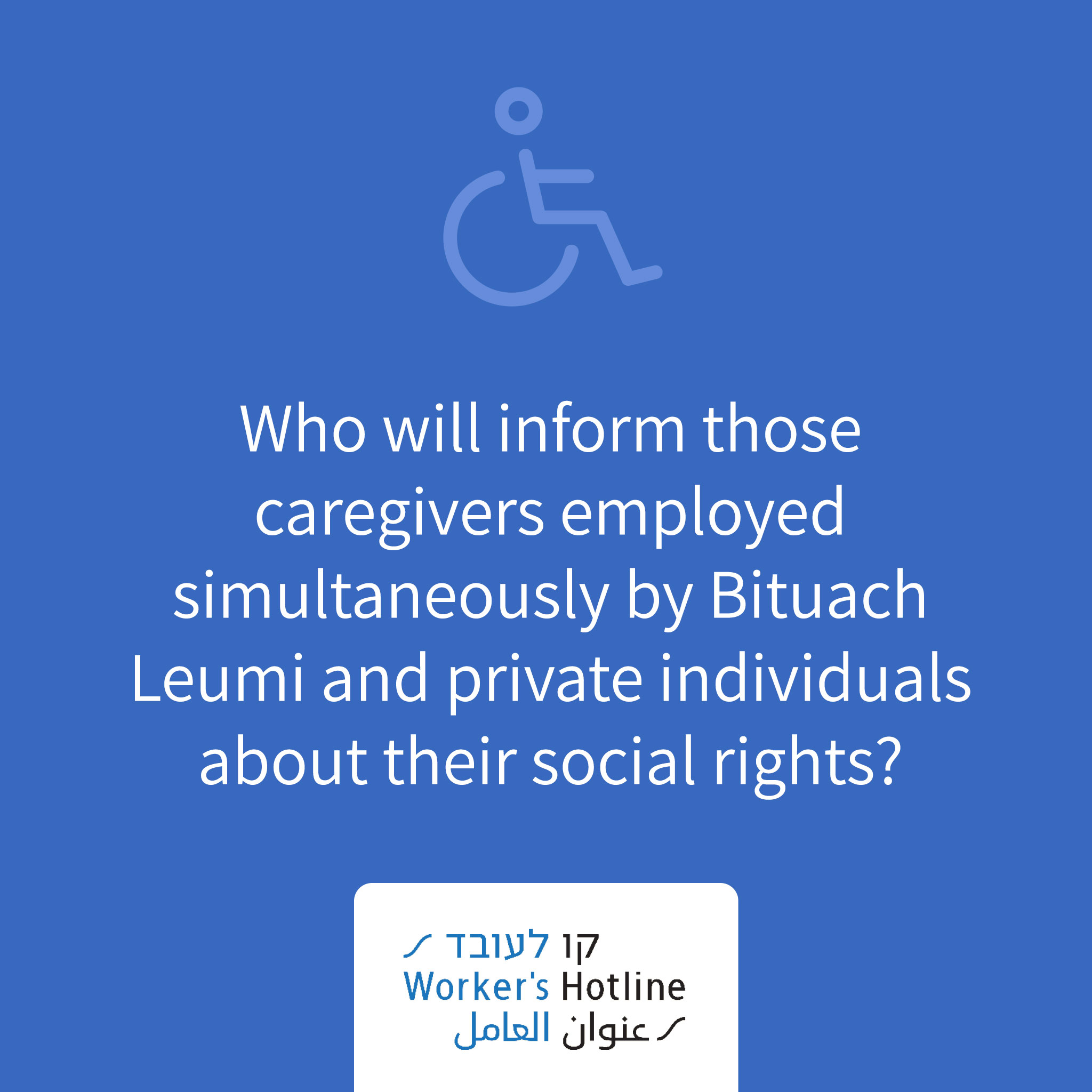 Many caregivers are engaged in “parallel employment,” meaning they are employed simultaneously by a private individual needing care and by a caregiving agency that receives funding from Bituach Leumi (National Insurance Institute) to provide a certain number of hours of home healthcare services to individuals based on their medical and financial situation. As of today, caregiving agencies do not inform either the caregivers they hire or the clients receiving home healthcare services about the overall percentage of the caregiver’s salary covered by the agency, which leads to an opaque and distorted payment arrangement that often disadvantages the worker.

We are advocating for explicit guidelines that would oblige caregiving agencies to make information available to both parties about the exact percentage of the caregiver’s salary budgeted by the National Insurance Institute, so that calculation of social rights owed to workers would cease to be such an (almost) impossible task. The National Insurance Institute should and can promote the accessibility of such information. 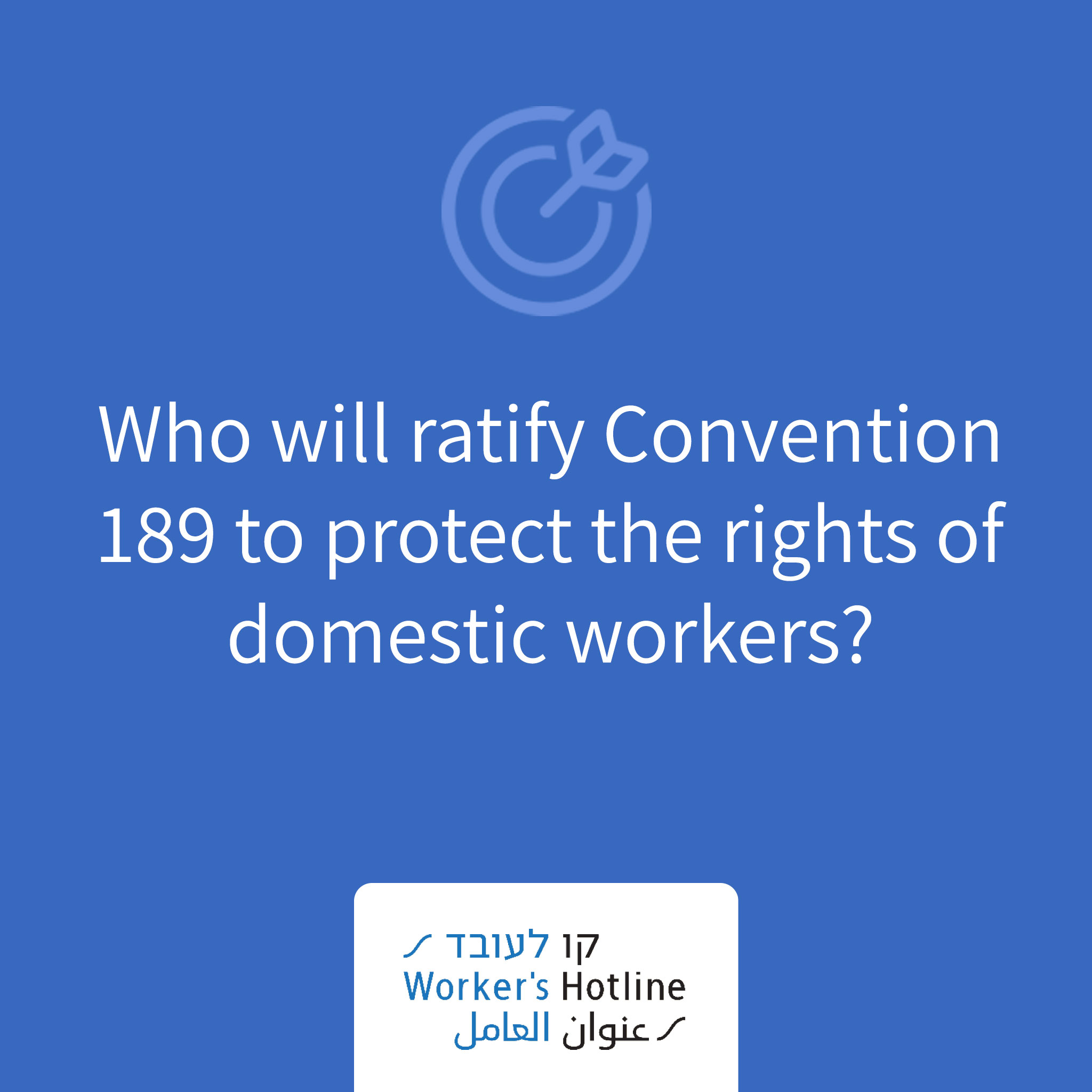 Many domestic workers are employed informally and do not receive the rights they deserve. Convention 189 of the International Labour Organization (ILO) states that countries must clarify the rights of domestic workers, protect them from harm and take measures to guarantee decent employment conditions for them. We demand the adoption of Convention 189 in primary legislation, which would entail creation of a standard employment agreement that provides domestic workers with basic information about their job, such as: employer details, job description, occupational safety and health obligations, employment period, social rights due, etc. Adoption of Convention 189 would also allow domestic workers to participate in the regulation process and give them and their representatives the opportunity to make their voices heard. It is much more pleasant to live in a world free from the violation of workers’ rights. The Ministry of Economy and Industry can adopt the recommendations and implement them.