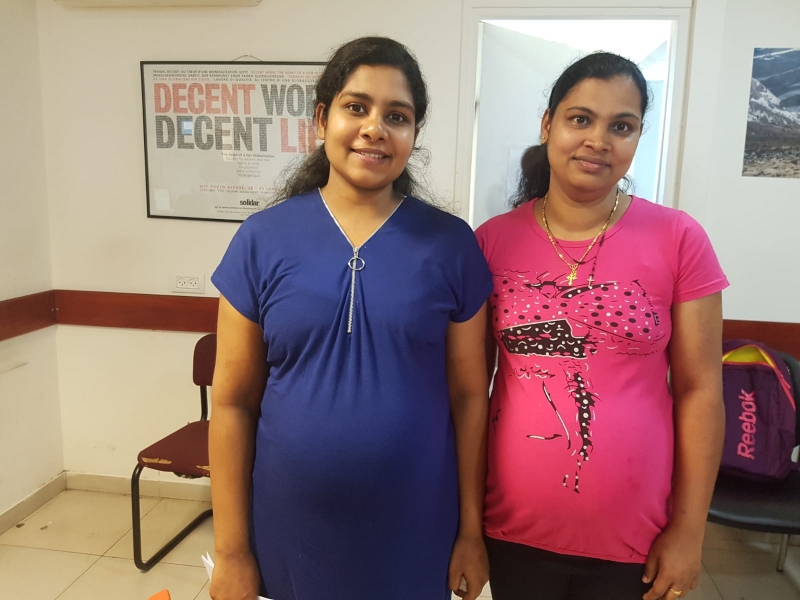 Thanks to Kav LaOved’s legal intervention, both Leena and Binsi are allowed to return to their country to give birth without risking their job placement

In this picture, you can see Leena and Binsi, both of which arrived in Israel at the beginning of 2018 to work as caregivers. Each of them paid an astronomical $6000 USD in illegal brokerage fees for the right to work in Israel. Soon after they arrived, each was surprised to discover that she was pregnant. In fact, both of their pregnancies proved to be high risk, complicating the situation and eventually leaving them unable to work and therefore unable to pay back the money they paid as placements fees to get a job in Israel.

Leena, who found out that she is pregnant with twins, was immediately fired as soon as she informed her 82-year-old employer of her pregnancy. Binsi stopped working after experiencing severe pain. They both found themselves in an impossible situation: unable to work in Israel, needing to rest until they give birth, and yet owing large debts that would be impossible to pay off by working in India.

Israel’s Ministry of Interior insisted that if they wish to keep their work visa for after the pregnancy, they must give birth in Israel. The only problem was that, in Israel, they have nothing – neither a roof above their heads, nor a way to survive until the end of their pregnancy. Kav LaOved’s intervened bringing about a humane solution: both Leena and Binsi were permitted to return to their countries to give birth where they could have the support of their family, and afterwards return to Israel for work