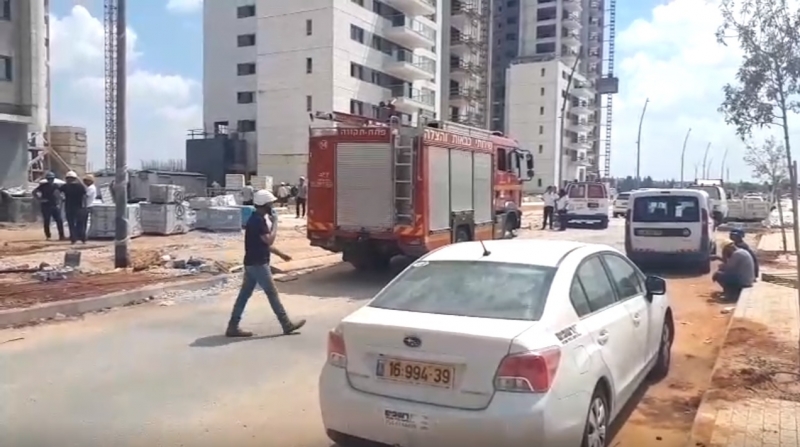 Summary: Week 33 of Work Accidents in the Construction Field for the Year of 2018

There were more accidents than days of the week last week. Horrifically, eight accidents on construction sites led to the death of 4 and injury of 6 workers.

Most accidents happened due to falls from work-at-heights, also the most common cause of deaths in Israel’s construction sector. These took place at construction sites run by well known companies Electra and Tidhar.

Sunday, August 12, a heavy object fell onto a 30 year old Palestinian construction worker. He was working on a site in Holon and was evacuated to Sheba hospital with a head injury.

Monday, August 13, three construction workers were killed and another was severely injured. At 9AM, a 22 year old worker fell five meters in Sderot’s industrial area; he was severely injured and evacuated to Soroka Hospital with a head injury. Just two hours later at a construction site in Rosh HaAyin, as two workers were working on a scaffold, it suddenly collapsed and crashed on top of them. The workers – Ibrahim Zakariya Muhammad Al-Hadidi (32), and Rami Abdullah Ali Bader (34) arrived that same morning from Beit Lakiya, near Ramallah, and never returned home. May they rest in peace.

The horrendous accidents just kept coming that day, with the additional tragic death of Ben Yajun, 35. He fell from the 4th floor at a construction site in the city of Lod. Yajun, a citizen of China, died immediately. May he rest in peace.
Tuesday, August 14, 22 year old Wissam Mahamid, who had been electrocuted a week earlier in a construction accident in Talmei Elazar, tragically passed away from his injuries. May he rest in peace.

Friday, August 17, a 22 year old worker fell on a construction site in Kiryat Ono. He was evacuated to Sheba Hospital with a head injury.

As we continue to witness these indescribable deaths and injuries on construction sites the Israeli government fails to take action to address the problem. The Histadrut, Israel’s largest trade union, finally woke up and voiced its outrage at the situation, declaring that after the holidays, unless drastic measures are taken to fix the situation, they would declare a strike. While they didn’t elaborate on their exact plan of action, but the support of the oldest, largest and most established trade union in Israel can only help further the struggle to fight for safety reforms in Israel’s construction sector.