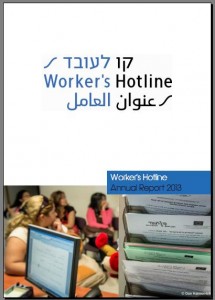 “In 2013 Kav LaOved – Worker’s Hotline was contacted by thousands of workers from across the country and the Palestinian Authority. Israeli, Palestinian, refugee and migrant workers came to us as individuals, but they all shared the experience of being denied their basic rights as workers in the Israeli labor market… Kav LaOved is a non-profit organization based on values of social justice. The staff includes 26 individuals and the crucial involvement of 130 volunteers. Kav LaOved staff work tirelessly to enforce workers’ rights and hence workers are returned millions of Shekels entitled to them by law which were previously withheld by employers.”

In 2013, Kav LaOved helped 40,000 workers through reception hours, the telephone hotline, answering emails and more. Also, in 2013, Kav LaOved was able to secure a total amount of NIS 19,235,055.90, compensation for workers whose rights had been violated.