M. has worked in a food processing company in Ma’ale Adumim for the last 18 years. He was paid below minimum wage until 2007, and did not receive his pension. In addition, he suffers from a weight related disease. After having surgery for his weight problem, M. asked his employer for one month off. His employer denied his request because his surgery was considered not life-threatening and by M.’s own accord. The workers at the company are both Arab and Jewish, but the company’s manager turns a blind eye only when Jewish workers take breaks when they should be working, and discriminately reprimands Arab workers when they do the same. Jewish holidays count as holidays for Christian and Muslim Arab workers, and they cannot take off work for their own religious holidays. Kav LaOved wrote the employer about these complaints, and met with workers to inform them of their labor rights under Israeli law. M. has acted as a representative of the group, helping other workers learn about their right to minimum wage, holidays, and other benefits. 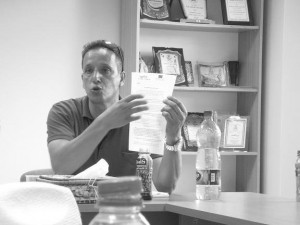 A. worked in a kibbutz near the Dead Sea for 5 years. He was rarely given holidays and did not receive his pension. When workers asked the employer for their rights to be uphold, they were fired, forced to take a polygraph test (as a tool of intimidation), or had their work hours lowered. A., along with another co-worker, was fired so that the employer could hire new people for lesser pay. After learning of Kav LaOved from other workers, A. received advice from Kav LaOved as well, including how to properly read pay slips, which are complex and often falsely documented. A. is now able to understand the pay slip system with help from Kav LaOved, so that he can be sure that he is paid for every work hour.

T. picked fruit for a company from 1988-1995, and after taking a break, returned to the job in 2010. He was not given any social rights, and was paid only 130 NIS for a work day that lasted from 6 am to 4 pm. In that year, a tree branch seriously damaged him when it stabbed him in the eye while working on the job. He asked to be taken to an Israeli hospital for immediate medical attention, but his contractor took him to a hospital in Jenin. T. paid 1,500 NIS for the surgery out of his own pocket, and has yet to be reimbursed by his employer. He asked for help when he heard of Kav LaOved from other workers. He has looked for other work in the meantime, but cannot find a job due to security restrictions placed on him by the Israeli state.

M. has been repairing pipes for a water company since 1993. Many years of hard work have caused back pain and medical issues.  He had unknowingly signed off his rights in a previous contract, and had recorded that he had taken holidays when he hadn’t (because he did not know how to read the pay slip). In 2000 he hired a lawyer and decided to sue his employer to receive his full rights such as minimum wage, holidays, and sick days. M.’s fellow co-workers face the same issues. Having heard of the organization from other workers, M. came to Kav LaOved for help. Because the back pain is work induced, but not a work accident, it will be difficult for M. to get disability from the National Insurance Institute. However, once M. receives confirmation from a doctor that it is indeed a work-related injury, Kav LaOved will then take his case to the National Insurance Institute.

M. is also currently settling a legal dispute on behalf of his brother who is in a coma due to a work accident. While picking dates from a palm tree in the Gilgal settlement, his brother fell from the lift. He asked for a helicopter to bring him to the hospital due to the severity of his injury, but police and only an ambulance arrived at the scene. Though the employer took responsibility (which is quite rare), M.’s brother remains in a coma until now, and his case is currently disputed among lawyers. 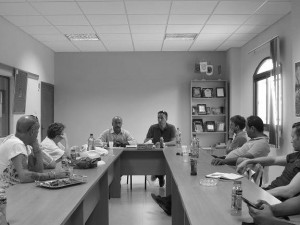