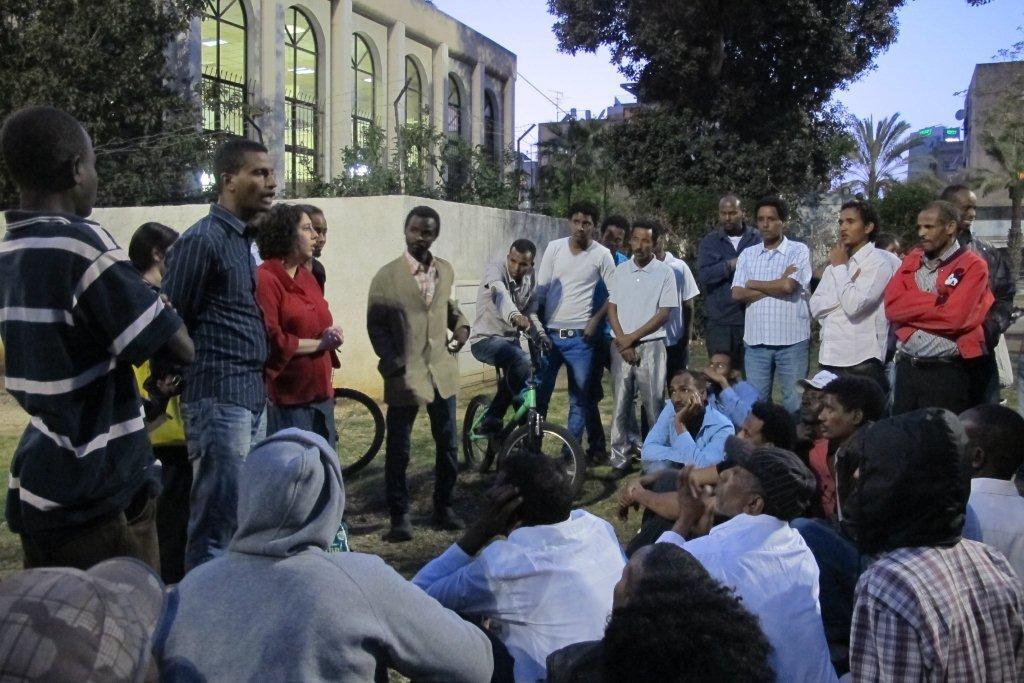 In 1951, Israel was among the first to encourage the formation of the UN Convention on Refugees, whose mandate was to define and outline the rights of individuals seeking refuge and asylum after World War 2 (WW2). Since the end of WW2 and until today, millions of people have become refugees in and out of their homeland. Israel absorbed a great amount of these refugees and asylum seekers in 2006.

KLO primarily helps refugees and asylum seekers from the African continent, the majority of whom are from Eritrea and Sudan.

African refugees have largely faced a challenging work climate since they began arriving in Israel in the mid-to-late 2000s. Only a handful of the more than 30,000 African asylum seekers living in Israel have been granted asylum status and most cases remain in limbo. There is virtually no state support for refugee presence in Israel and the community faces a constant threat of deportation and an uncertain future. Lacking official asylum status as well as work permits (the state tacitly allows them to work), refugees and asylum seekers are vulnerable to exploitation in the workforce. The workers often encounter problems such as withholding of wages and benefits, illegal dismissal procedures, and women report illegal firing during pregnancy. Tax policy regarding refugees and asylum seekers was also ambiguous, which resulted in many challenges for refugees, including obtaining refunds to which they were entitled. They continue to pay the highest tax rate possible.

The greatest problem facing refugees and asylum seekers, however, had been the Deposit Law, which was enacted in May 2017. Employers were required to deduct 20% from refugee and asylum seeker salaries and deposit these funds in a state-managed account along with an additional sum accounting for the employee’s benefits (paid by the employer) totaling 16% of the RAS salary. Asylum seekers and refugees only had access to this money when they left Israel to resettle in another country. This policy had a dramatic impact on the community’s already low salaries, reducing them by 20% and dropping many workers below the minimum wage. For an in-depth analysis of this law, please see our report published in the spring of 2019 in partnership with the Hotline for Refugees and Migrants. Kav LaOved and Tel Aviv University’s Refugee Rights Clinic successfully changed the Deposit Law in April 2020 thanks to a three-year-long High Court legal petition. The High Court overturned the 20% salary deduction requirement and required that all funds accumulated in deposit accounts be returned to workers. Since this ruling, over ILS 200 million has been returned to more than 14,000 workers. Other aspects of this harmful law, however, continue to affect refugees and asylum seekers.

KLO maintains informational Facebook pages in Tigrinya, Arabic, and English where we regularly post updated information about labor law, policy changes affecting the community, as well as videos detailing how to attain labor rights. The KLO website also contains labor rights brochures. KLO staff also provide training and ongoing guidance to members of the refugee and asylum seeker community and NGOs working with them on Israeli labor law here in Tel Aviv and other areas in the periphery, including Eilat.

KLO is the main organization providing support on labor rights for refugees and asylum seekers in Israel. Given the long-term struggle to determine their legal status and future home, securing their right to a sustainable livelihood is one key area in which we can empower the community to regain a sense of agency and normalcy. While KLO’s work mainly focuses on the refugee and asylum seeker population in Israel, we also provide support to those who were resettled abroad. We are in touch with them to ensure that they received the full benefits they are due upon leaving Israel, including from their deposit fund and the National Insurance Institute (Bituach Leumi).

Addressing the Deposit Law. KLO began advocating against this harmful law since its inception. KLO advocates for obtaining exemptions for categories of vulnerable workers, ensuring that trafficking survivors were given full refunds and eventually ending the law’s requirement that employers deduct 20% of workers’ salaries altogether. Despite these critical advocacy successes, the law remains an issue for refugee and asylum seeker workers. We are focused on addressing several areas of this law:

KLO has identified many cases in which employers deducted 20% of worker’s salaries, but did not place these funds in workers’ deposit accounts. We are advocating on behalf of these workers with enforcement structures and Bituach Leumi to identify avenues for ensuring the owed funds are returned to workers.

Many workers still have unclaimed funds in their deposit accounts because they either left the country without being given their refund, were not informed that they had a deposit account, or face bureaucratic barriers in accessing these funds. KLO is working to identify these workers and provide assistance in retrieving their due funds.

Refugees and asylum seekers have faced high unemployment and economic hardship as a result of the pandemic without a safety net to support them. The pandemic has demonstrated the tremendous vulnerability this community faces in response to stressors. They are ineligible for State safety net programs. Under the Deposit Law, social rights payments are still placed in workers’ deposit accounts as part of their work benefits. Accessing these funds would be critical to supporting the community if they are unable to work due to sickness or old age and KLO is seeking options to allow these funds to function as a safety net for refugees and asylum seekers in times of need.

Addressing Subcontract Employment Model. Many low-income Israelis, as well as refugees, are hired through subcontract employment and KLO often hears reports about labor violations at these companies. Through Freedom of Information (FOI) requests and direct assistance to workers, we are clarifying the scope and scale of these labor rights violations and identifying advocacy measures to address systemic problems.

Barriers to Employment. KLO is investigating a number of cases that point to the emergence of a larger trend in the pandemic-impacted economy. There is political pressure to address unemployment among Israeli citizens and the perception that refugees are taking needed jobs has resulted in refugees being pushed out of fields, such as municipal street cleaning, in which they have been formerly employed. KLO is tracking these trends to better understand the overall situation and will take legal measures as needed and appropriate to protect the rights of refugee workers.

Foreign Worker Surcharge. Many subcontract and placement companies are closing their doors after having to pay (retroactively) a 20% surcharge for hiring “foreign workers”. This surcharge is in addition to funds extracted from refugee and asylum seeker salaries for the Deposit Fund. KLO has advocated within government agencies to assist refugees and asylum seekers in these situations, and we are mapping appropriate legal avenues to continue addressing this issue.

Mainstreaming Labor Rights. KLO regularly coordinates with a variety of governmental bodies, such as the Population and Immigration Authority (PIBA), the Ministry of Economy, the National Insurance Institute (Bituach Leumi), and the Israel Tax Authority to address the needs of refugees and asylum seekers and to provide up to date information on key issues affecting their labor rights. KLO also participates in the inter-ministerial task force on trafficking and has provided training to PIBA staff on guidelines for identifying trafficking survivors in their work with refugees and asylum seekers. KLO is a key partner and grant recipient of UNHCR in Israel and coordinates with them closely in addressing the needs of refugees and asylum seekers. At the community level, KLO offers ongoing labor rights training to NGOs working with the refugee and asylum seeker community and regularly advises employers on how to employ refugees responsibly.

Media Advocacy. KLO contributed to articles in the Israeli and international media regarding the situation of refugees in Israel and particularly the harmful effects of the Deposit Law.