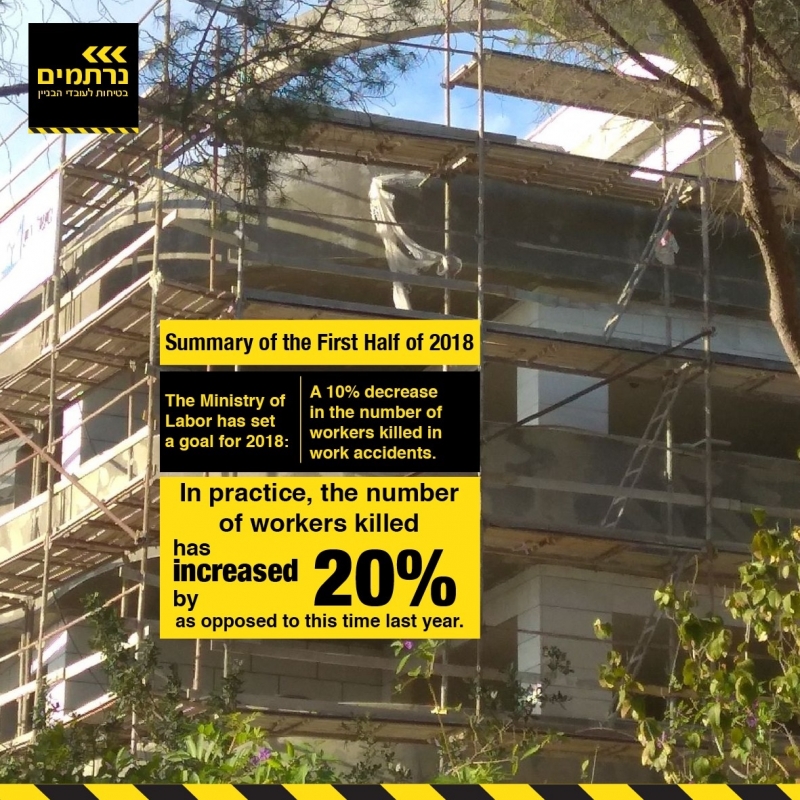 A 20% increase in the number of workers killed in the construction sector, as opposed to this time last year.

A 20% increase in the number of workers killed in the construction sector, as opposed to this time last year. These are the findings of a report made by “Nirtamim – Harnessing Civil Society for Safety Reform in the Construction Sector”, summarizing the first half of 2018.

The Ministry of Labor and Social Affairs has set a goal for 2018: decreasing the number of workers killed by 10%. In practice, this goal is very far from being met.

Other findings of the report include the number of accidents caused by falls from heights: 70% of them. In addition, 68% of all deadly accidents are caused by falls from heights. You would think that this problem could be significantly minimized, by adopting a European scaffolding standard, which the Minister of Labor has instructed his clerks to enforce upon contractors. When exactly this will be implemented, and the timetable are both unclear. Absurdly, as of today, this standard is mandatory for the companies who rent out the supplies for scaffolding, but not for the contractors who use those supplies. As the companies renting out the supplies are not supervised, this mandatory standard becomes meaningless to them – and to the contractors. The second biggest cause for construction works accidents are supply falls: 14% of all accidents, and 16% of deadly accidents, are caused by this.

Additional statistics show us who exactly are the ones paying with their lives for the government’s insufferable abandonment of the workers, meaning, the identity of the workers required to take dangerous jobs upon themselves: 47% percent of the workers killed in construction work accidents are Palestinian residents of the West Bank, and 32% are Arab citizens of Israel.

And what is being done to end the deaths and injuries of those who build our homes? Not a lot. The Registrar of Contractors could use its authority to conduct disciplinary proceedings against contractors who have been convicted with safety offenses, or whose work sites have had safety orders imposed upon them, yet continues not to do so. The Ministry of Labor has not done its duty and hasn’t released the exact financial sanctions imposed on contractors to deter them from committing these offenses. It has come out with headlines saying that it has, but within the information being released, those numbers have not been found. The number of inspectors in this sector is still embarrassing – with 22 inspectors supervising over 13,000 work sites. The Safety Administration is supposed to supervise every construction site in which work accidents have occurred, but in practice, work accidents that lead to moderate injuries are not subject to supervision or investigations.

Read the full report in Hebrew: